Islam lays great stress on the importance of unity. The unity of mankind makes an invincible powerful nation.

Hold fast to the rope of Allah all together, and do not separate. Remember Allah’s blessing to you when you were enemies and He joined your hearts together so that you became brothers by His blessing. You were on the very brink of a pit of the Fire and He rescued you from it. In this way, Allah makes His Signs clear to you, so that hopefully you will be guided (103). Let there be a community among you who call to the good, and enjoin the right, and forbid the wrong. They are the ones who have success (104). Do not be like those who split up and differed after the Clear Signs came to them. They will have a terrible punishment

The Quran in Surat Al-Hujurat says: “O, Mankind! We created you from a male and female, and made you into nations and tribes so that you might come to know each other. The noblest among you in Allah’s sight is the one with the most taqwa. Allah is All-knowing, All-Aware.” (49:13)

“Men and women of the muminun are friends of one another. They command what is right and forbid what is wrong. They establish salat and pay Zakat. They obey Allah and His Messenger. They are the people on whom Allah will have mercy. Allah is Almighty, All-Wise. ” (The Holly Qur’an, 9:72)

“A Muslim is the brother of another Muslim. He does not oppress him, nor does he leave him at the mercy of others.” (Sahih Muslim Book 032, Number 6219)

The Prophet said: “None of you will have faith till he wishes for his (Muslim) brother what he likes for himself.” (Sahih Al-Bukhari Volume 1, Book 2, Number 12) 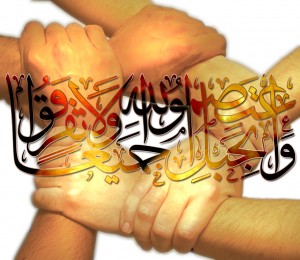 The Muslims are like a body; if one limb aches, the whole body aches. Unity teaches peace, equality and paternity. The absence of unity brings and breeds disruption, devastation and disputes. I hope we stay united.